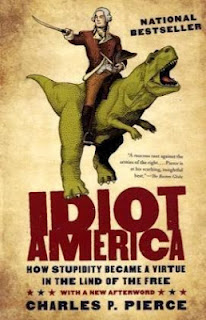 I recently read Charles P. Pierce’s book “Idiot America: How Stupidity Became a Virtue in the Land of the Free.” It came out in 2009, and it has a lot to say about the current state of public discourse in the United States. I firmly agree with Pierce’s main thesis; that the public conversation in America is getting dumber and dumber. And I also agree with him that the right wing is largely to blame for this dumbing down of the public conversation. In my opinion, the right wing’s complete inability to deal with scientific facts of any kind is very troubling.

Throughout the book Pierce presents Founding Father James Madison as the voice of reason and moderation. I’m a huge fan of James Madison, and I think he doesn’t get as much credit as he deserves, so I’m a big fan of this literary device. I think Madison’s brilliance often gets overshadowed by Jefferson’s. This isn’t fair to Madison, as pretty much anyone’s brilliance would be overshadowed by Jefferson’s. Pierce also focuses on Ignatius Donnelly, who was a 19th century author and politician from Minnesota who helped start the Populist Party. (Donnelly was also Minnesota’s second Lieutenant Governor, and represented Minnesota’s 2nd Congressional district in the U.S. House.) Pierce holds up Donnelly as the model of the quintessential American “crank.” I’m not quite sure why Pierce romanticizes the idea of the American crank so much, but it annoys him that now cranks are fully within the political and social mainstream.

One thing that “Idiot America” makes very clear is the idea that everyone is now an expert about everything. All you need is someone to anoint you as an expert, and you’re all set. And facts seem to all be weighted equally now. There are no more “big facts” and “little facts.” Because everything is weighted equally, we need to give both sides their proper respect, even when it’s clear that the facts on one side outweigh the other. Intelligent design needs to be taught alongside evolution, even though there is way more evidence in favor of evolution. In general, I think it’s fine and admirable to present both sides of an issue, but there are times when one side is clearly more correct. Like evolution.

Pierce covers many different things during the course of “Idiot America,” from the theory of intelligent design, global warming and climate change, the intelligence failures during the buildup to the U.S. invasion of Iraq in 2003, and the rise of talk radio. His chapter on talk radio is probably the best in the whole book, and for my money, shows where much of the blame for the relentless dumbing down of America comes from.

Perhaps the biggest problem with Pierce’s book is that his 3 main ideas were basically brought up by Stephen Colbert on his show “The Colbert Report.” Pierce never mentions Colbert in his book, which I think is a gross oversight. Pierce’s 3 great Premises of Idiot America are:
Any theory is valid if it sells books, soaks up ratings, or otherwise moves units.
Fact is that which enough people believe. Truth is determined by how fervently they believe it.
Anything can be true if someone says it loud enough.

This is pure Colbert, who says pretty much the same thing every night on his show. Colbert is mocking those conservative pundits who stick to these 3 ideas on their own talk shows-of course, on the actual conservative talk shows any sense of irony is removed. But it’s very true of America these days that whoever shouts the loudest is believed. This is one reason why the right wing has been so successful in setting the political agenda for the past decade or more.

In order to fully engage with his material, Pierce really needed to address Colbert’s ironic take on modern punditry. Pierce even talks about thinking with the “gut” instead of the mind, which is again one of Colbert’s standard bits. Colbert hit on this topic on his very first “Colbert Report,” coining the term “truthiness,” which basically means that the truth is what you feel it to be. As Colbert says, “Truthiness is what you want the facts to be, as opposed to what the facts are.” This is central to Pierce’s whole book, and yet he never mentions it.

If you believe that Kennedy was killed by a massive conspiracy, it’s comforting because what you are saying in essence is that it took numerous people with unlimited power to kill him and cover it up. The conspiracy worked because it was so big, with the full power of the Mafia/CIA/FBI/J. Edgar Hoover/Lyndon Johnson/whoever behind it. And that’s why Kennedy’s assassination was never solved, because the conspirators had enough power to fully cover their tracks. It doesn’t matter which particular conspiracy theory you believe in, the idea behind it remains the same, that this was a crime that involved many powerful people. It was not just a lone nut with a rifle. Kennedy’s death also has more importance and more meaning as part of massive conspiracy. With a conspiracy, there was some reason why Kennedy was killed. Again, it doesn’t matter which particular conspiracy theory you adhere to, the idea is the same, that there was a reason why Kennedy was killed. With a conspiracy theory, you’re saying that Kennedy died for something, that he was killed because of his beliefs. It wasn’t just Lee Harvey Oswald acting alone for mysterious reasons. If you believe in a conspiracy theory, what you are really saying is that you don’t believe that a malcontent loner armed with a mail-order rifle killed the President of the United States in broad daylight in the middle of a major American city. Because that’s an extremely unsettling idea.

William Manchester, the author and historian who wrote the 1967 book “The Death of a President,” one of the most thorough accounts of JFK’s assassination and the days following it, came to the conclusion that Oswald had acted alone in killing the President. Manchester had this to say about conspiracy theories: “If you put the murdered President of the United States on one side of a scale and that wretched waif Oswald on the other side, it doesn't balance. You want to add something weightier to Oswald. It would invest the President's death with meaning, endowing him with martyrdom. He would have died for something.”

Conversely, if you believe that Kennedy was killed by Lee Harvey Oswald acting alone, then you can take some comfort from the fact that Kennedy’s death was more or less random. There was no grand meaning behind the assassination; it was merely the inexplicable act of a madman. If you believe it was Oswald, that means that you don’t believe that shadowy parts of our own government were in any way involved in the killing of the President. If it was Oswald acting alone, then there were no shadowy cabals meeting in secret to plan the President’s death. And that’s a source of comfort, that our President was not killed by rogue elements of our national security apparatus.

Part of the enduring mystery of the Kennedy assassination is the fact that Oswald himself remains such an enigma, as he was shot and killed by Jack Ruby less than 48 hours after Kennedy was shot. Because Oswald did not fully explain whatever reasons he might have had for killing the President, (or an alibi for not killing the President) he becomes a tabula rasa, a blank slate on which we can put any information we want to. Oswald could become the ruthless killer, or the hapless patsy upon which the killing was pinned. You could even split the difference between the two theories and believe that Oswald did fire the shots that killed Kennedy, but that he was a part of the conspiracy. There’s so much here that Pierce just didn’t get into, which is unfortunate.

I think that “Idiot America” is certainly a worthwhile read, and Pierce makes a lot of good points in it, but it has some limitations, and he could have dug deeper into this material.
Posted by Mark at 4:14 PM 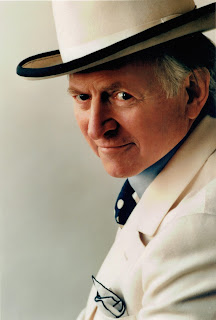