In my last post, I wrote about 10 Essential Miles Davis albums. I’ve been a fan of Miles Davis’ music for a long time now, ever since 1998-99, when I first started getting into jazz. I keep returning to Davis’ music. There’s so much depth in what he recorded that I can go back and listen to his albums time and again and still hear something new. While I was writing my 10 Essential albums list, I was thinking about all of the great music that I was leaving off that list. Miles Davis recorded 48 studio albums and 36 live albums, and there are also 17 box sets of Davis’ work. So the idea came to me to create a list of 10 Underrated Miles Davis albums. These are albums that might not get mentioned with Davis’ finest work, but are still full of incredible music. The albums are listed in the order they were recorded.

“Miles: The New Miles Davis Quintet,” recorded 1955. This was the first full album that Miles Davis recorded with his “First Classic Quintet,” which featured John Coltrane on tenor sax, Red Garland on piano, Paul Chambers on bass, and Philly Joe Jones on drums. In 1955 Davis had kicked his drug habit, and his triumphant comeback performance at the Newport Jazz Festival spurred interest in him from major record labels. Davis got a new group together, and it was full of talent that would shape jazz for decades to come, even if few people at the time had heard of John Coltrane. The album demonstrated that these five musicians worked very well together, and it marked the first appearance on record of “The Theme,” a song that would become Davis’ regular set-closer for many years to come. The cover photo of a stream is usually tinted blue, but it’s also tinted green on some releases of the album.

“Relaxin’ with the Miles Davis Quintet,” recorded 1956. Davis and his “First Classic Quintet” recorded enough material for four albums over two days in 1956 in order to fulfill Davis’ contract with Prestige Records. “Relaxin’” is another excellent album, and features “If I Were a Bell,” which was a staple of Davis’ concert repertoire. I singled out “Cookin’” one of other albums Davis recorded for Prestige in 1956, as one of the “10 Essential Miles Davis Albums.” The other two 1956 Prestige albums, “Workin’” and “Steamin’” are classics as well.

Soundtrack to “Ascenseur pour l’echafaud,” also known as “Lift to the Scaffold,” or “Elevator to the Gallows,” recorded 1957. This one is pretty obscure. In Paris in late 1957 Davis recorded the soundtrack to a Louis Malle film, known by the three titles listed above. Davis wrote out only the barest sketches before the recording session, and most of the music was improvised in the studio. The music is spare and haunting, pointing the way towards the modal jazz of “Kind of Blue.”

“’58 Sessions,” also known as “1958 Miles,” recorded, obviously, in 1958. Davis recorded four songs at one session in May 1958: “On Green Dolphin Street,” “Fran Dance,” “Stella By Starlight,” and “Love For Sale.” It wasn’t enough material for an entire album, and these songs were eventually collected together along with some live tracks from 1958 featuring the same band. The band on “’58 Sessions” is the same group that would record the classic “Kind of Blue” the next year. Bill Evans had replaced Red Garland on piano, and Evans was the perfect choice as Davis started to explore modal jazz. “On Green Dolphin Street,” “Fran Dance,” and “Stella By Starlight” are all beautiful songs, delicately and exquisitely performed, while “Love For Sale” swings mightily. These recordings are superb, and proof that Davis should have taken this group into the recording studio more often.

“Someday My Prince Will Come,” 1961. I wrote a long piece about this album as part of my series on the albums that Hank Mobley recorded with Miles Davis’ band in 1961. Mobley is one of my favorite jazz musicians, a tenor saxophonist who recorded many classic hard bop albums for the Blue Note label. Mobley and Davis didn’t quite gel, but the music they created together sounds fantastic. “Someday My Prince Will Come” was Davis’ small-group follow-up to “Kind of Blue,” and as such it’s a vastly overlooked album in Davis’ catalogue. Highlights include a cameo by John Coltrane on the title song and the Spanish-tinged “Teo,” and the lovely ballad “I Thought About You.”

“In Person Friday and Saturday Nights at the Blackhawk,” recorded 1961. I also wrote a long piece about this album as part of my series on Hank Mobley’s albums with Miles Davis. Expanded to 4 discs in 2003, these live dates feature one of Miles’ best bands, with Mobley on tenor sax, and one of the greatest rhythm sections in the history of jazz, pianist Wynton Kelly, bassist Paul Chambers, and drummer Jimmy Cobb. The band really cooks together, and Davis takes some great solos. This is hard bop at its finest.

“Seven Steps to Heaven,” 1963. This album found Davis in transition between groups. 1962 had been a difficult year for the trumpeter, as he struggled with health problems. The only recordings he made were the desultory sessions for the “Quiet Nights” album with Gil Evans, which both men were dissatisfied with. Davis was irate when Columbia put out “Quiet Nights” in 1964, and he didn’t speak to his producer Teo Macero for two years afterwards. In early 1963, Davis’ rhythm section of Wynton Kelly, Paul Chambers, and Jimmy Cobb left to form their own group. Davis was starting over from scratch, and half the “Seven Steps to Heaven” album was recorded in Los Angeles, with the other half being recorded in New York City. Bassist Ron Carter was the only person besides Miles who played on all the songs. The songs recorded in LA were all lovely ballads, beautifully performed by Miles, while the New York City songs were all swingers. The group that performed the New York City songs was George Coleman on tenor sax, Herbie Hancock on piano, Ron Carter on bass, and 17-year-old prodigy Tony Williams on drums. Davis knew he had something great with that rhythm section, and when Wayne Shorter replaced Coleman in 1964, Davis’ “Second Classic Quintet” would be in place. The title song is a highlight, and it shows how amazing a drummer Williams was.

“The Complete Concert 1964: My Funny Valentine plus Four and More,” recorded 1964. This two-disc set was recorded at a benefit concert at Philharmonic Hall in February, 1964. Davis was at the top of his game, as he handled ballads and swingers with equal skill. When these recordings were originally issued, the decision was made to put all of the ballads on one album and all of the swinging songs on another album, thus the music was not in the order it was actually performed in. When the “Seven Steps: The Complete Columbia Recordings of Miles Davis, 1963-1964” box set was issued in 2004, the concert was presented in the correct order, with the previously unreleased “Autumn Leaves” opening the show. Oddly enough, the concert wasn’t re-released as a stand-alone two-disc set, so you can only get the concert in the correct running order on the box set. (Or you can program your CD.) The concert is excellent, featuring great work by Davis, Coleman, Hancock, Carter, and Williams. This would prove to be George Coleman’s last recording with Miles.

“Filles de Kilimanjaro,” 1968. If you look up “transition album” in the dictionary, you’ll find a picture of the album cover of “Filles de Kilimanjaro.” (Although really, isn’t every album a transition between one thing and another?) “Filles” features the last recordings of Davis’ “Second Classic Quintet,” before Ron Carter left the group. The music has one foot rooted in the previous work of the Quintet, and one foot in the electric fusion future to come with Miles’ next album, “In a Silent Way.” But don’t overlook “Filles” just because it’s tough to classify. The album still features excellent music, with solid grooves and exemplary work by all the musicians.

“Get Up With It,” 1974. This was Davis’ last album before his 5 year retirement, which lasted from 1975-1980. (Davis was lucky he survived his retirement, as he spent most of those 5 years consuming copious amounts of drugs.) The music on “Get Up With It” was recorded at various sessions from 1970-1974. It’s an extremely eclectic album, ranging from the bluesy, harmonica-led “Red China Blues,” to the frenetic fusion blur of “Calypso Frelimo.” Davis plays organ on several of the songs, and he doesn’t play the trumpet at all on “Rated X.” The highlight of the album is unquestionably the haunting, melancholy “He Loved Him Madly,” a 32-minute tribute to the recently deceased Duke Ellington. "He Loved Him Madly" is a fascinating piece of music, and Brian Eno has said that it was an influence on the ambient music he was recording at the time.

There you have it, another ten fascinating albums from one of the geniuses of jazz, Miles Davis.
Posted by Mark at 10:28 PM

I've gotta tell ya, these posts on Davis and Brubeck couldn't have come at a better time for me. I've decided to really expand the jazz portion of my collection, and I only own the bare basics of the well known greats (Coltrane: Giant Steps & A Love Supreme; Davis Kind Of Blue, Birth Of The Cool, Bitches Brew and On The Corner; Brubeck Time Out; Mingus, Ah Um)...and that's about it. SO, thanks for this, hope there's more to come! Your SInatra posts were a Godsend!

Thanks E! You definitely need more Coltrane, Miles, and Brubeck in your collection! With these posts I thought, "I should write about some things I know really well," which I think was a good idea.

The Debutantes: Victoria and Lavinia George-Veale. Promo photo for "(If Paradise Is) Half as Nice." Lavinia and Victoria in vint... 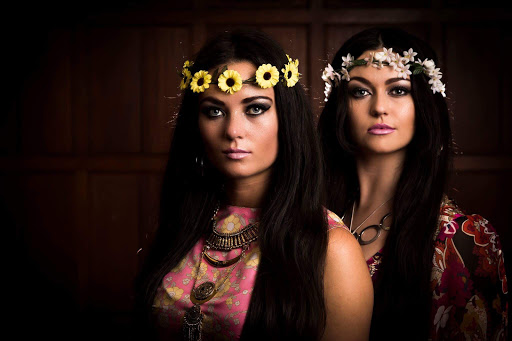